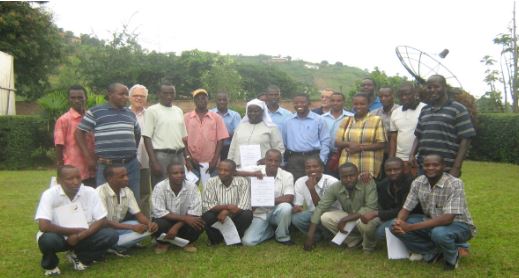 Training session for Photovoltaic technicians carried out in Burundi by Efrem

Caption:Installation of a photovoltaic system for offices in Kenya

Good day, I am Giovanni Benedetto Colombo. I am currently working and living in the Democratic Republic of Congo as a Catholic volunteer. I have known Africa since 1965. I graduated in Economics at the Catholic University of Milan in 1969 and founded the NGO Efrem – Energy Freedom in 2007. Since 2009, I have had a small academic activity at CUEA (Nairobi – Kenya), at the Catholic University of Milan and Piacenza (Italy), at Makeni University (Sierra Leone), at UAC (Butembo – DRC).

Efrem’s mission is to spread the culture and use of renewable energy in poor countries to reduce poverty and mitigate pollution, deforestation and desertification, i.e. respect the environment and biodiversity.

For this purpose, Efrem has designed a number of actions and plans, namely:

Respect for the environment

Respect for the environment is absolutely essential for the well-being of the planet. According to Efrem, today the main threat to biodiversity is human activity, caused by:

Installation of a system to produce boiling water and boiled water in DRC, starting from hot water produced with the water heater in the previous picture.

Fighting to preserve the environment in poor territories: examples of Efrem’s innovative actions:

Plan to significantly reduce pollution, deforestation and desertification in Catholic residential schools in Tanzania. It consists of an off-grid photovoltaic system to produce green electricity with a solar thermal panel to produce green hot water. The two systems are coupled with cooking devices, such as induction plates and pans, ovens and so on. The systems will compose a set for the preparation of daily meals in the Catholic boarding schools: no wood, no coal, no fuel.

Pollution, deforestation and desertification will be reduced to zero. During the summer vacations, the system will be used to activate IGAs (income generating activities), producing

food for sale or for self-consumption. The same action can be proposed to any Catholic boarding school in poor countries, as well as to Catholic health entities and/or Catholic communities. Due to a lack of (at least partial) funding, the plan has not yet been implemented, even though a number of economic, technical, and social feasibility studies had been conducted by Efrem.

Plan to reduce pollution, deforestation and desertification in the villages of Butembo-Beni Diocese (DRC). It consists of an off-grid photovoltaic system to produce green electricity with one (or more) solar thermal panel(s) to produce green hot water. Both systems are coupled with boiling devices, such as induction plates, pots and pans. The systems will compose a set to prepare boiling water (used for home cooking) and boiled water (used as drinking water). Following our tests, the firewood saved will be nearly 50% for boiling water for cooking and 100% for drinking water.

poor. The use of the electricity produced by the 24-hour activity of the power plant is limited to the time of consumption, which, on average, is 12 hours per day. Therefore, the vast majority of the nightly production (about 95%) is lost. The solution to this situation is the accumulation of energy produced during the night and not consumed.

The action consists in equipping the hydroelectric plant with a sufficient number of batteries to accumulate the energy generated (and not consumed) from 6 am to 6 am. The same batteries, from 06:00 a.m., will return the energy accumulated during the night to the small network. Efrem has carried out a general economic feasibility study of the project.

Considering about 20 micro and mini hydroelectric plants belonging to the Diocese of Butembo-Beni, the loss of electricity is about 1,800 kWh. This means, in value, 2.7 million dollars each year (1800 kWh * 12/h per day * 365 days per year * 0.35 selling price in $ of 1 kW in Butembo). No precise calculation has been made at present on the annual reduction of pollution, but of course it exists and it is probably not small. The same action (accumulation) can be proposed to all micro and mini hydroelectric plants in poor countries.

Plan for the conservation and transformation of food which, in general, is lost in the villages of the diocese of Butembo-Beni. It consists of an off-grid photovoltaic system to produce green electricity. The system is coupled with cooking appliances such as induction plates, pots and ovens. The FAO informs that every year in sub-Saharan Africa, 157 kg of food per person is lost due to lack of preservation and/or processing. This means that in an African family of about 6.5 people, each year, 1,020 kg of food is wasted. The economic loss is about 400 USD per year per family.

Efrem’s objective is to reduce this loss through specific actions, namely: A – Drying of fruits and vegetables that usually deteriorate. B – Drying of meat and fish that usually deteriorate C – Processing of fruits that are usually not consumed into jam and/or candied fruits. The preservation and processing of food using green energy will reduce the consumption of firewood and other fuels, reducing pollution, deforestation and desertification, thus protecting biodiversity (free of charge). In addition, the same system will be able to produce other foods, such as bread and other baked goods. If equipped with an electric mill, it will grind corn or other grains. An incubator could also be supplied.

Efrem has installed 2 ovens and 5 induction cookers in Tanzania and DRC, all powered by a photovoltaic system. They dry mangoes and produce bread and small pizzas for the moment. In the near future, meat and fish will als be dried. The same action can be proposed to any village in poor countries. These are only a few examples of social applications of renewable energy, mainly related to food and livestock. Many other social applications are available.

Training session for Photovoltaic technicians carried out in Burundi by Efrem

Protecting the planet’s biodiversity is a moral duty for all people of good will, no matter who they are or where they live. Combining the protection of biodiversity with the fight against poverty can become a large-scale social action, allowing hundreds of millions of people to regain human and Christian dignity, reducing the risks of conflict and disease arising from poverty and respecting the environment. At a very, very low cost. Efrem has conducted numerous studies on different ROI (Return of Investment) of the social application of renewable energy. They are all positive. It is time to act. Thank you very much for your attention.